Are you a naturally positive person?

I have occasionally been accused of being overly positive in the face of adversity. The idea that positivity is something which one could have too much of is, quite frankly, perverse!

I am not sure why my positive outlook mystifies some people. Is it that they think I am somehow in denial about my health situation? Or rather that they would be more comfortable if I was evidently distressed about it, as that is how they think they would react? Does seeing someone else apparently at peace with the cards life has thrown, make them in some way question their own attitude to life?

Being tied up in how miserable life can be is a very English phenomenon. Positivity, even if it can appear a little fake, is one of the biggest things I miss about my many years spent living in the USA. How much nicer to say, ‘Have a nice day’, rather than ‘Rubbish weather isn’t it’.

My standard answer when someone asks, ‘How are you?’ is most often ‘Fabulous’ or ‘Brilliant thank you’, rather than the standard ‘fine’.

It is bemusing how taken-aback people can be if you give an unusually positive response. I aspire to be so much more than fine, and am not ashamed to admit it.

I have no interest in passing judgement, but will say that actively seeking out positivity and surrounding myself with others who similarly manifest it, has been one of the biggest game changers in my life.

I haven’t always been a positive person. I went through some time in my late teens and early 20’s when I am pretty sure I had clinical depression, and I chose to bottle things up until they almost overwhelmed me.

There have been other significant ‘wobbles’ over the years, and yet somehow I always find my way through. I am happier now than I have ever been, and no matter what comes my way I expect my positive nature to remain.

Bad things still happen, but I bounce back quicker. Part of the skill has been to develop what I suspect is an above average level of self-awareness. I don’t simply allow myself to feel a certain way, but instead like to analyse why.

I know that the emotions I manifest are 100% under my control.

I can choose to be happy, sad, angry, hopeful, miserable, grateful, vindictive or excited. Something, or someone, can only make me feel a certain way if I allow them to.

Positive emotions need nurturing, just like negative ones. Bad attracts bad, good attracts good, and the emotions we live with the most become self-fulfilling.

How else is it that people who have seemingly faced the worst: death, murder, destruction, famine, war, extreme poverty or persecution can still be content and happy?

They have likely accepted what has happened, found some form of benefit and meaning in their experience, and then used it as a springboard for personal growth.

We are only victims of our circumstances if we choose to be.

We always have the power to change our lives for the better. The situation you find yourself in today, does not automatically dictate how it will be tomorrow. Remaining positive is the key, and it is empowering to believe that our life can always be better. 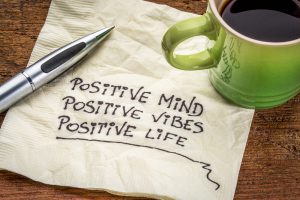 If I look at a typical statistical bell curve, I think people used to dwell near the middle, with a healthy mix of positive and negative feelings. I wonder if modern ‘aspirational’ society is skewing us more towards the negative, with its constant (usually false) indicator that other people have so much more – more money, more possessions, more holidays, more happiness, more fun etc.

It is perhaps not surprising that so many people feel inadequate when they are forever comparing themselves to others. None of those things above bring true happiness, as that is an attitude which comes from within.

Have you ever noticed that when you feel negative emotions, those thoughts can start to consume you? We shut down, our self-talk becomes a repetitive diatribe where we attempt to justify how we are feeling, and we often lose perspective and balance.

We say we are ‘in a bad mood’, which in effect means that we are actively looking for other negative experiences to validate why we are grumpy. Undoubtedly, if we want to be down, we can all find plenty of reasons to indulge!

When I find myself dwelling on negative rather than positive emotions, I can quickly go from one bad incident to thinking that everything is conspiring against me. I normally realise what is happening and try to have a quick attitude adjustment.

Only on Friday night, I was driving home from work when somebody deliberately came up the outside of me at the roundabout and tried to carve me up on the junction. In one instant I felt angry, as if this was a personal affront to my sense of fairness.

My mind took off, and I found myself annoyed about the weather and how it would disrupt my plans for a Saturday bike ride, the slight by a supposed friend who let me down, and the time it had taken me to cancel the bill from a company whose service I cancelled last month.

I could go on, and for a short while I did.

And then I realised that I was about to allow a pratt in his car to affect my thoughts for the rest of the night. It would have ruined what was an otherwise fabulous day.

I don’t want to exist in the middle, or worse still negative end of the bell curve. I want to be one of those people who finds joy in the simple stuff, can rise over life’s obstacles, and actively looks for the benefit in difficult situations. Perhaps, most importantly, it is my mission to inspire others to do the same!

People have often said that I have bounced back amazingly quickly from my various medical dramas. I find that term odd, as it indicates that I have reached the same point in life that I was before. It’s not true, and every adversity has instead been an incredible opportunity to learn, grow and come back better. Without those challenges, I wouldn’t be who I am today.

I take absolute responsibility for who I am, what I do, and how I show up in the world.

I can’t easily change much of what happens to me, but I can control how I react. That is always my choice, and I am determined to find the positive in every situation.

It’s not about having rose tinted spectacles, or failing to acknowledge that bad things happen. We can’t go around pretending that we are happy, or denying that sometimes life is hard and unfair. Instead, I take those negative feelings, embrace them, live with them for a short time, and then deliberately let them go before they get a hold.

Stewing, ruminating, being bitter or resentful, blaming others, holding a grudge……none of it helps. In fact, it generally makes things worse!

I have a three-prong strategy to deal with it when I start to feel myself going down that slippery slope.

Firstly, I decide that those negative feelings are of my own making, and hence I have the power to see things in a different light. All too often, we seek to actively blame someone or something else for whatever has happened, as in doing so we can alleviate some of our own responsibility.

Secondly, I seek to change my state. I force myself to do something completely opposed to the emotions I am feeling. I might deliberately smile, laugh, dance, sing – anything which gets me out of my current head space and breaks the process of rumination.

I dare you to try laughing and being angry at the same time! The motivational guru, Tony Robins calls this pattern interrupt, and it is a very powerful tool for changing our state.

Thirdly, I remind myself of how much I have to be grateful for. I will not allow one less positive incident to overshadow my day, month or year. I have spoken before about my gratitude journal. Either in the morning or evening, and sometimes both, I write down three things I feel grateful for. Similarly, if I feel negative thoughts welling up during the day, I take a few minutes of reflection and use it to seek perspective.

It can be very simple; right now, it is the cup of green tea on the desk in my favourite mug, the smell of clean laundry, and the funny text I have just received from a friend. It is impossible to feel a positive and negative emotion at the same time, so I smother my negativity with gratitude whenever it rears its head.

Can you find three things to be grateful for in this moment? Note: If you can’t, then you need a serious reality check!

Being positive is a choice.

So yes, maybe you think I am annoyingly positive, but I prefer to think of myself as a realistic optimist. Bad things have happened to me, and will do again. I don’t deny it, but I don’t dwell there either, as to do so will rob me of my ability to live an inspired life.

I only get to live once, and to waste precious time lost in negativity means that I will inevitably miss out. Positivity nurtures the spirit, whereas negativity squashes it.

I am going to continue to radiate my positive vibes, and aim to surround myself with people who do the same.